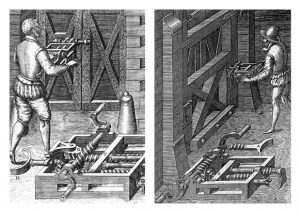 For further information go to www.mrlocksmith.com 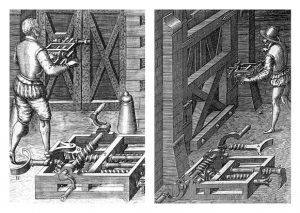 Leonhard Danner of Nuremberg was a Sixteenth-Century Nuremberger engineer/inventor. Nuremberger (Nürnberg) was the leading metalworking centre of Europe.

Danner was renowned for inventing and manufacturing instruments which could demolish strong Medieval Moorish castle walls, gadgets for breaking through locks and metal bars as well as creating lifting machinery for heavy artillery. At the same time, he was also producing delicate artistic works.

The Danner screw device or “Dannscher Brechschrauber” which could destroy locks came from his workshop around 1560 and the operation of the vicelike tool was as simple as it was effective. The machine’s lawless efficiency and capacity to enable criminal behaviour was quickly recognized by the Nuremberg City Council and they issued a decree banning it from January 16, 1561. Anyone requesting such an apparatus should be reported to the reigning mayor and instructions for manufacturing them were restricted. This did not prevent more of these ‘Dannscher Brechschrauber’ being manufactured.

“Danner’s breaking screw consisted of two hooks, which could be stuck under the lock cover, and a thread bar, which made it really simple, to break the lock of the door.”

As a consequence of this invention, locksmiths developed far better and secure locks and other locksmiths, criminals, etc. invented methods to defeat these new locks.

For Mr. Locksmith Franchise and Licensing Opportunities go to http://mrlocksmith.com/locksmithfranchise-opportunities/