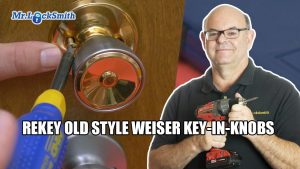 Rekey Old Style Weiser Locks Key-in-knobs where extremely popular long, long time ago, it was everywhere in North America. Nowadays we see less and less of them, but it’s still important to know how to rekey it. One of the key parts is identifying it. Basically, it could be a knob like that, different colors, it could be an orbit, circular, just different styles of the rose and how the lock comes out. Now one way of identifying it was, a lot of them have the push and turn lock. So on the inside to lock it, you just push and turn, and then when the key goes in, here, you turn the key, it just turns a little bit. It just pops it out and then the lock is unlocked.

Now one of the big problems of Rekey Old Style Weiser Key in Knobs is when this handle gets old, it just stays in, so the customer’s turning the key, and the key turns but the lock won’t come undone. That’s another issue, on how to get through that, but right now we’re just going to show you how to rekey them. So to rekey the lock is quite simple, there are just two small screws on here. Go ahead and take the knob off. Just loosen it a little bit, loosen the other one. You have to come in on an angle to get it out. I had somebody ask me once, “Do you have a screwdriver that will do this easier?” And I’m going, no, this is the way it is, unfortunately. Again, the brand name is Weiser, they never, we see a lot of Weiser locks now which are actually Kwikset locks, this was never part of Kwikset, so it only says Weiser, Weiser locks. It takes the Weiser key, in a pinch, you shouldn’t do it, but in a pinch you can use a Kwikset key, but that’s not proper. So basically the knob was just lock-in, and what always happens is that little spring in there would just wear out. Now they used to sell a kit, extra springs, but that was back in the day when you did a lot of repairs, and the people would replace the spring. So the lock is very simple. Take it out; now another way of identifying this, how to take it apart, is there are no holes anywhere, to press the retainer in to remove this cylinder, or the knob. In the back here, see how it’s springy? What we have to do to remove this, we have to hold this out, and then, you see when it was locked, the key only turns that far, to unlock the door. When we wanna rekey it, we pull out the rear post, and at basically the five o’clock, 10 to five position, and it just comes out. And you can see here we can take our bible, to put it back together again, we have our bible, we have the little slot there in the knob, so we’ll put it back at 10 to five, that’s the time I call it, hold out the little post again, and you put it in at 10 to five, and basically put it back in. Sometimes it can be sticky, but the biggest problem is just pull that out, turn it, boom. If you don’t have a key, now it gets a little bit more difficult, but again, it’s a Weiser, it’s extremely easy to pick, just pick it to that position, just pick it over, just hold the post out, pick it to the 10 to five position, and sometimes you can push on this a little bit and it will push out the cylinder. Now to rekey it is interesting. Now if you don’t have key, if you have a key you can take it apart, but if you don’t have a key you have to shim it, and again, it’s a Weiser, it’s easy to pick, easy to shim. So we got the cylinder, so to take out the plug, got the little circlip, and I love this, this is Snap-on, it lasts me forever, and if it breaks they give me a new one. Just gently, just open it up just that little bit. Insert your key, turn it slightly, I have an HPC, hollow follower, just fits on there really nice. And it’s five pins. And we have done enough rekeying videos, this one’s lucky, it’s got the, got the code on there, it’s a direct code. We can just pin it up with the lab kit, and then when you put it back in, just make sure you put it on a slight angle and just put the plug back into the cylinder. Take out the key. I am doing this for the camera, but it’s best to put it on your desk flat. I got my little Snap-on tool. Again, don’t go crazy on opening this, and just put it back on. Always test, test, test. Sounds perfect, clips on good. Now I put it in the 10 to five position. Put my bible into the little spot there. And give it a little twist to make sure that the little post has engaged the back of the lock. So again, there are some different methods, this is the simplest, pull out the post, hold it, some people put a pair of pliers on the back, turn it, now this one did come out extremely easy, let me show you a tougher one here. So that one’s really easy. Here’s another one, this is a real old one I got kicking around. Old one with a new insert. How does this one? See, this one’s not coming out so easy. So again, I’ll just push on the post a little bit, there we go. So basically I’m just pushing on that, and it just pushes it out. So this one’s a little bit more awkward and tougher. And it goes in okay. Rekey Old Style Weiser Key in Knobs. Still see them out there, and you could also see different colors and a different knob style, but again, the secret is it’s got the post on the back.

I hope you enjoyed watching this video, please subscribe to my channel.